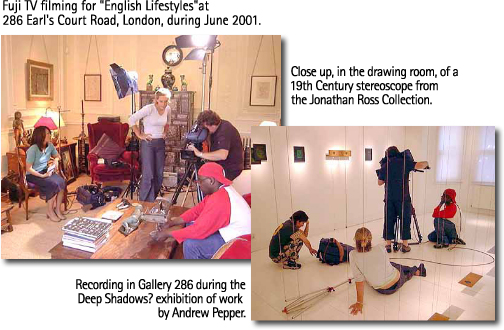 “English Lifestyles”, is a programme made for Japanese Television by Fuji International Productions.

It is a 30 minute programme that features the home and working lifestyle of an individual or couple. Previous programmes have featured the likes of Le Gavroche owner Albert Roux, interior designers Nina Campbell and Michael Reeves as well as artists such as Andrew Logan and shoe designer Patrick Cox.

Presently the programme is broadcast on the Fuji channel in Japan and it has a reported viewing figure of three million. Recently it has also been commissioned by a satellite station called BS Fuji. The audience is very varied and includes a wide range of age groups and professionals from students of interior design to hoousewives as well as art dealers and other proferssionals interested in keeping up with the latest fashions in the UK.