The exhibition comprises ceramic works by Christine Binnie, paintings by Jennifer Binnie and Wilma Johnson, and will also feature a book-reading by Wilma, archive sessions with Christine, and who knows what in the way of surprise performances and guest appearances…

The Neo Naturists were formed in 1980 by Christine Binnie, Jennifer Binnie, Wilma Johnson and Grayson Perry as a performance based live art practice.

The group was started “in the cultural context of post punk, the Blitz Kids, Rolf Harris, transvestites, the advent of Thatcherism and the London club scene.” They usually performed naked wearing body paint.

Regular contestants in Andrew Logan’s Alternative Miss World and exhibitors at James Birch Gallery, the Neo Naturists’ appearances were a memorable feature of 1980s London clubland and art scene, assisted by a shifting cast of performers..

Since 1986, Christine and Jennifer have been the principal Neo Naturists and have tried different ways of performing. “Doing more, doing less, taking themselves seriously, not taking themselves seriously. Still however, performing rituals, household tasks, cooking, singing and giving communion.” These days, apart from their occasional joint activities, Jennifer mainly makes paintings, while Christine is a ceramic artist. She is also compiling The Neo Naturist Archive as a document of their performances, They were recently listed among Andrew Logan’s  10 Biggest Show-Offs  in The Observer Review.

Jennifer Binnie first exhibited at Gallery 286 in 2002, showing her Wildflower Hubcap Paintings in a Christmas Show guest-curated by Andrew Logan, and has since had one person shows here in 2003 and 2007.  Her paintings mainly reflect her life in rural Sussex, real and imaginary, along with her interest in Pagan ceremonies and folklore. Previous exhibitions have investigated Grimm’s Fairy Tales and Jennifer’s very unique version of celebrity portraiture (paintings on canvas ornamented with embroidered details).

Christine has exhibited her highly original ceramics at 286 in several group shows . Traditional forms subverted with often contradictory words and images. She has also produced ceramic works as documents of Neo Naturist activities.

Wilma Johnson moved to Ireland and brought up her children while continuing to paint. Now she lives in France, and has just published ‘Surf Mama’ which tells the story of how she learnt to surf at 42.  This amusing memoir, gorgeously illustrated with her paintings of female archetypes, also recalls Neo Naturist days. It is her first appearance at 286. and the first time she has exhibited current work alongside Christine and Jennifer since the 1980s.

Having been introduced to ceramics by Christine,  Grayson Perry went on to become ‘the first transvestite potter to win the Turner prize’, in 2003. He has just had a one-man show at the British Museum …but I’ve got the girls at 286! 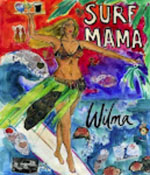