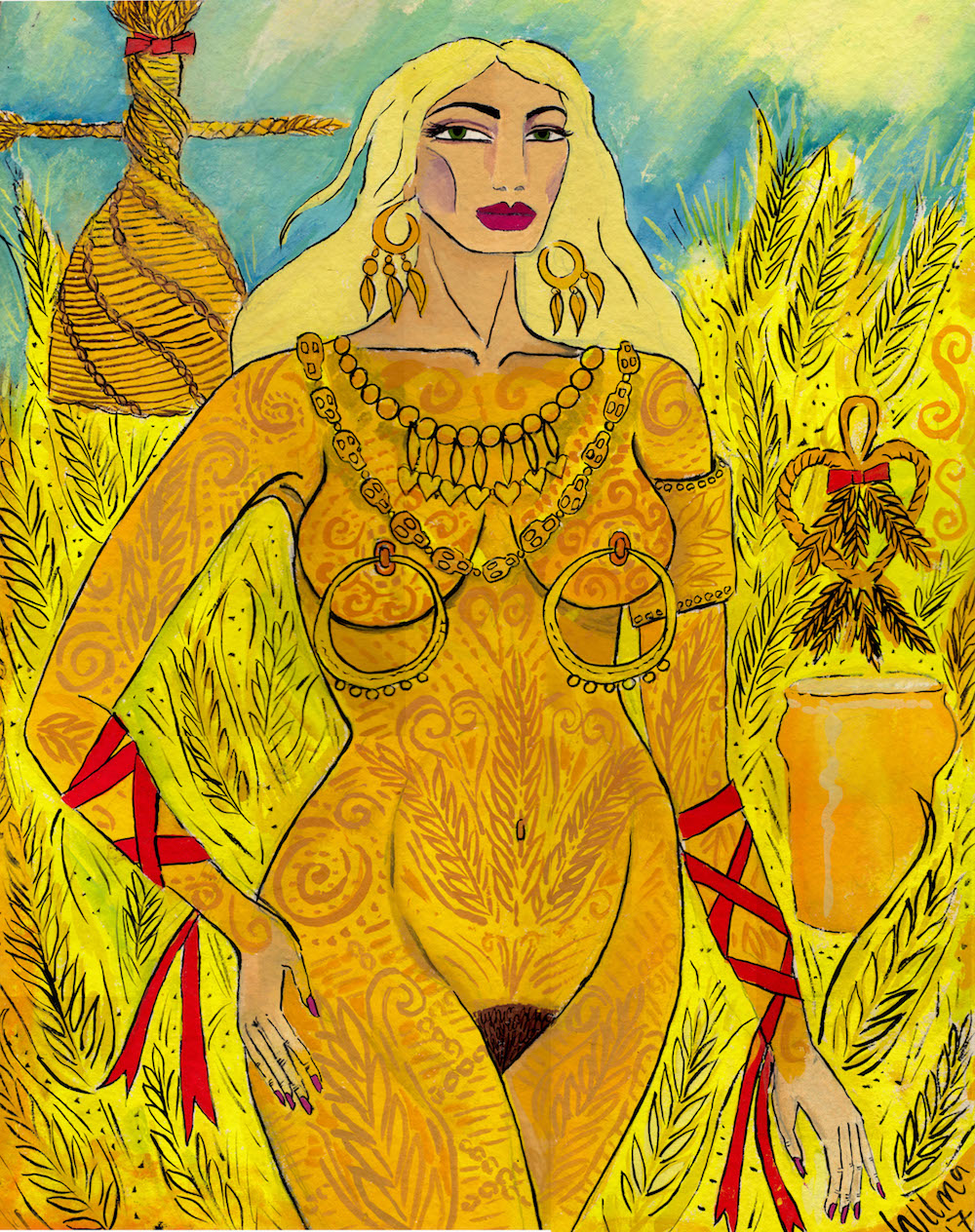 Open Days
Wednesdays 12.00 – 6.00pm
Viewing by appointment at other times

Wilma Johnson’s paintings are narrative and autobiographical, taking inspiration from her travels and experiences. She has lived in London, Mexico, and Ireland and is now based in Biarritz.

She is also a founder of the Neo Naturist performance art group and the author of Surf Mama.

This will be her first show since losing all her paintings in a fire in 2015.

Wilma Johnson is an artist, writer, surfer and co-founder of the Neo Naturists.

She was born in London in 1960 and has a degree in Fine Art from St Martins College of art.

In 1980 she founded the Neo Naturists with Christine and Jennifer Binnie, performing in venues as diverse as Taboo, the Spanish Anarchists Centre and the Royal Opera House. Throughout the 80s Wilma also exhibited paintings inspired by hitch hiking to Italy, Iceland, Scotland and Lappland in underground galleries in London.

In 1987 she went to Mexico for a year, spending time with friends of Frida Kahlo, painting as she travelled and following the fiesta. The vivid colour and vibrant imagery of the country had a strong and lasting influence on her work.

In 1991 she went to live in a fishing village on the west coast of Ireland, continuing to paint and show her work while bringing up her three children in an isolated farmhouse on the Dingle peninsula.

She moved again in 2002, to Biarritz in the French Basque country, where she wrote her first book Surf Mama. She still lives there, and apart from painting and writing has recently returned to performance art, with the Neo Naturists.

This will be her first painting show since almost all her paintings, drawings, sketchbooks and photos dating back to 1980 were destroyed by fire in 2015.

Wilma Johnson previously exhibited at Gallery 286 in a group exhibition with Christine Binnie and Jennifer Binnie in 2012.

Last summer I was living in a caravan on a naturist beach near Biarritz. Then I came to London to do the Neo Naturist retrospective and Corn Sisters cabaret at the ICA. It was the first body painting I had done for 30 years and I found it very inspiring. The two experiences made me think about nudity and bodies and how clothes have become the norm whereas nakedness is seen as weird and subversive.

I think of myself essentially as a naked woman, even if I sometimes drape a few clothes over my body for practical reasons. The women in the paintings are not sexualised or pornographic, but they are not desexualised either. They are just women from a woman’s perspective. In some ways they are a reaction to the passive life models painted by men throughout art history, which is often how we see The Nude.

The Neo Naturist Flashbacks is an album of snapshots, moments captured as if by a polaroid camera, from Flashing in the British Museum in 1980, to the Magical Golden Corn Dolly of Bling in 2016. I like the idea of painting a painted woman, blurring the line between what is real and what is imagined. The women are placed landscapes and dreamscapes, in stage sets with cabaret props scattered around them .

Other pictures show goddesses or mermaids, femmes fatales with their spirit animals.

The pictures are made in Indian ink and gouache, spontaneous and immediate ways of working to fit in with the naked theme.

View video of Wilma talking about her work and exhibition here.  (Opens in a new window/tab) 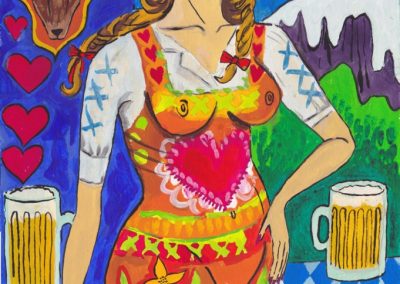 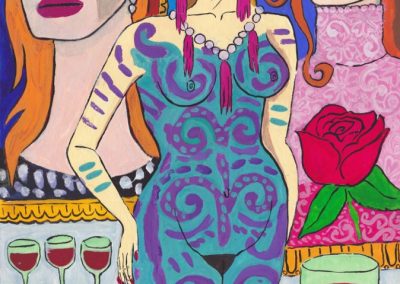 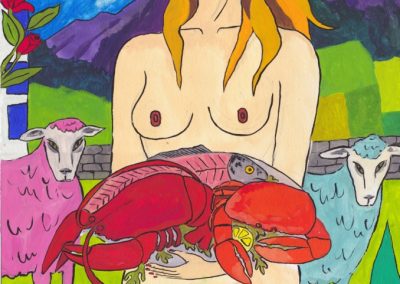 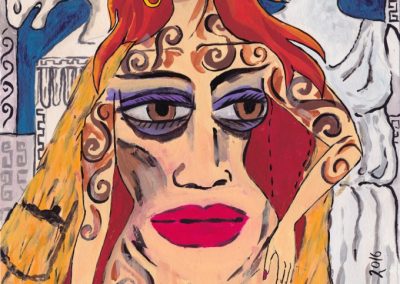 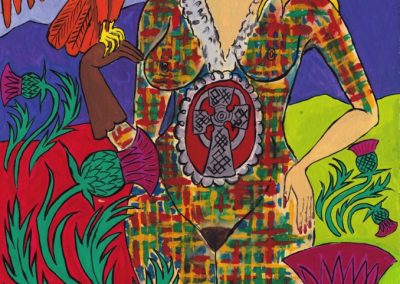 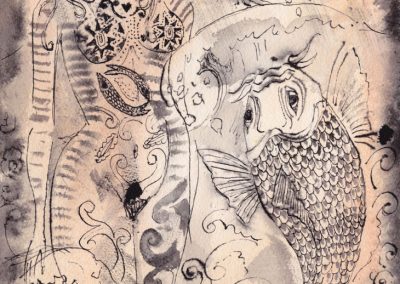 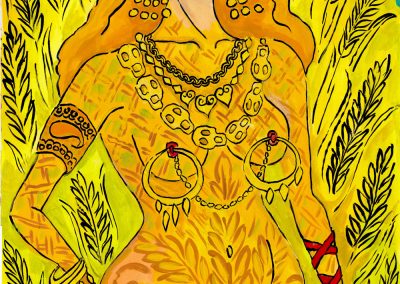 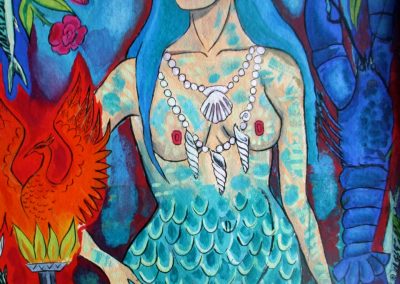 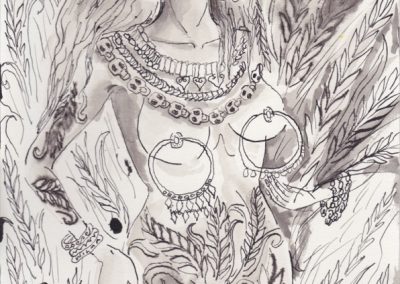 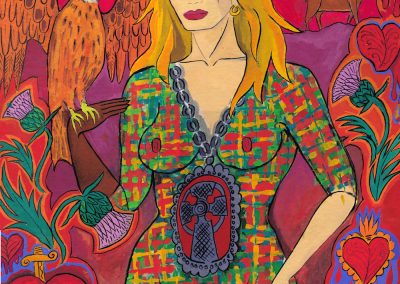 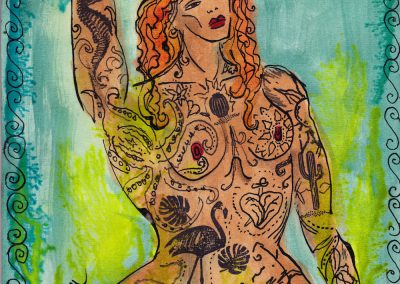 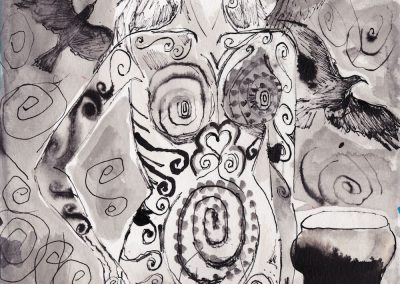