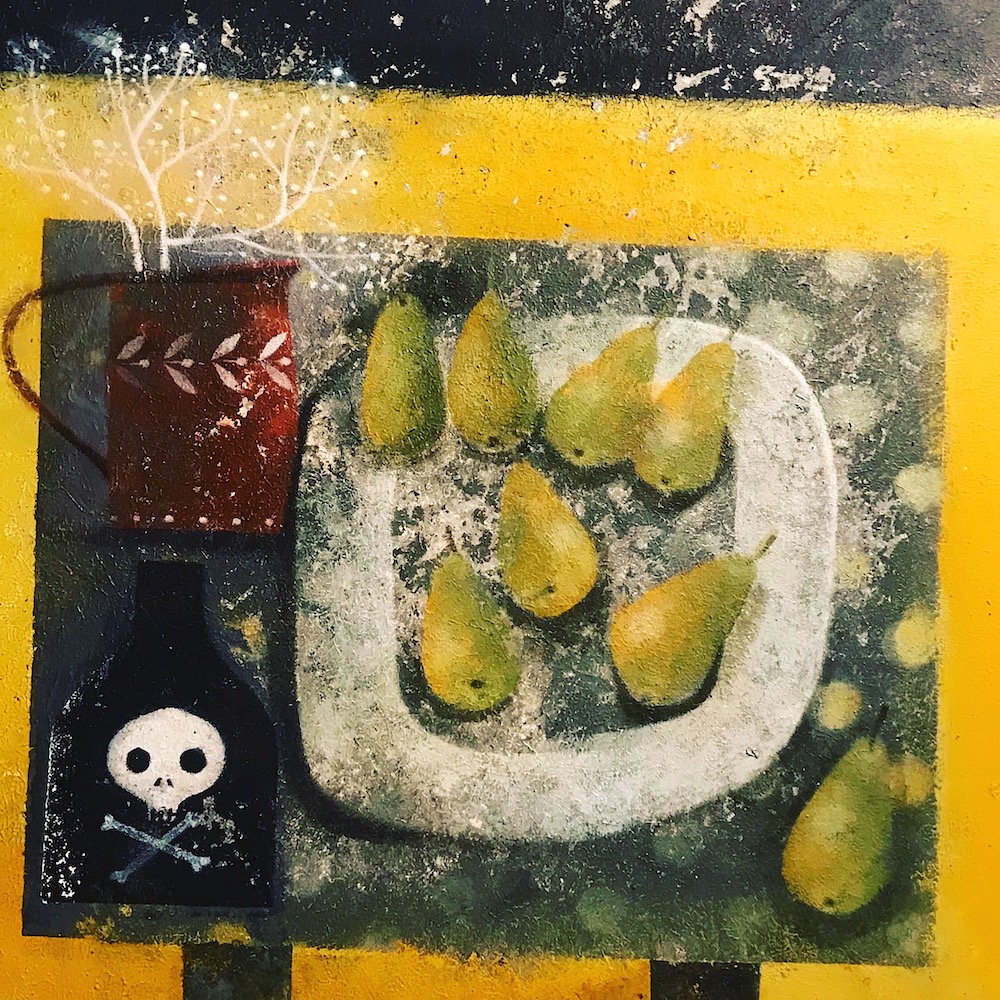 Graham Ward was born in Bradford, West Yorkshire in 1955. He grew up in Sussex and studied at Brighton University. After three years on the Fine Art Course in Stoke, he completed his M.A. at Manchester University. Moving to London in 1980, he worked as a freelance illustrator for ten years and undertook a number of commissions for publishers such as Penguin, Picador Books and Methuen, and was a series illustrator for Time-Life Books. His work also included a number of editorial illustrations for magazines such as New Scientist, G.Q. and the Sunday Times.

An abiding influence on Graham’s work has been the ancient Spanish School of painters, and his use of tempera and gold leaf in many of his works reflects an interest in the sacred aspects of representational subject-matter. Working largely on board, his use of modern acrylics work suitably with the methods of the 12th and painters of the Romanesque, where tempera painting was popular. His subjects continue to be animals and child-like figures; many of his paintings concentrate on the individual in an invented landscape, often populated by child-kings and Holy . A series of new works are set to concentrate on the Journey of the Magi, based largely on the poem by T.S. Eliot and the cycle of poems by Orcadian poet George Mackay Brown, a writer that Graham has often turned to for inspiration (undertaking in the mid- 1980’s a suite of paintings based on Mackay Brown’s ‘A Scottish Bestiary’), and by a self-imagined cycle of pictures centred around the Kings of Leon, whose remains are interred in the Pantheon of San Isidro at Leon in Spain. His work is held in a number of private collections in the United Kingdom. Europe and the United States.

Published to mark the occasion of a 40-year retrospective exhibition of works from 1981 to 2018, its primary focus is a series of paintings conceived during and after a four-day journey to the small fishing port of Finisterre on the Iberian Peninsula of Northern Spain.

Having undertaken the Camino Frances from the Pyrenees in France to Santiago de Compostela in Galicia on a number of occasions previously, the path to Finisterre is seen by many as a separate pilgrimage where the journey continues from the clamour of the city and on – to wildness of the Atlantic. During the four days that it took to reach my destination, a series of images began to form that in direct response to the act of walking, and it became apparent that just possibly, there might be a way of interpreting my experience as a series of works that might identify themselves as differing in technique from the manner with which my work is usually perhaps best recognised. As the days went by, I became aware of a possible motivation for the journey: to witness an effigy housed within a particular church which stands beside the coastal path to the Cape.

Alleged to date from the 14th-century, the Santo Cristo de Fisterra has contained within Our Lady of the Sands, and is a depiction of the crucified Christ, revered by the Galician people and sharing, in common with its counterparts in Ourense and in Burgos, a degree of physical verisimilitude alarming for the time it was created. Fashioned by an unknown hand and, in common with the so-called ‘Master of Burgos’, the Finisterre Christ displays the marks of suffering and passion that is striking for a work of such early fashioning: indeed, its impact on the onlooker in the dimly-lit interior can best be described as arresting. My essay Macabre Simulacrum; the Holy Christ of Finisterre seeks to delve more fully into the statue’s history and symbolism, and the act of a journey made in order to see it was, and has remained, a kind of catalyst for the creation of a series of works that, in truth, have remained somewhat elusive in their creation until recently, tending to defy creation due to the complexities involved in attempting to interpret landscape and the sense of place that this particular region of Spain holds for me. Pilgrimage is, by its very nature, an inexact experience or rather- a progression of physical and mental sensations which cannot readily be defined- particularly as one lives through such experiences by travelling and existing in such an elemental fashion.

Walked in antiquity, the Camino Fisterra was a pilgrimage made in pre-Christian times when it was widely construed that the route made by the walker on earth mirrored the heavenly path of the Via Lactea in the heavens above. The Great or the Land of Tir--Nog was said to lie beyond the broiling waves at Finisterre’s westernmost Cape, and the journey made in modernity may somehow be seen to link us directly to a shared ancestral past. My essay Beginning at the End: Finisterre and the Celtic Imagination elaborates on the spiritual significance of the and emphasises the importance of the Fisterra journey made in modernity.

The Stations of the Cross or the Way of the Cross, also known as the Way of Sorrows or the Via Crucis, refers to a series of images that traditionally depict Christ on the day of his crucifixion, and the act of viewing them is customarily accompanied by prayers and incantations. The stations grew out of imitations of the Via Dolorosa in Jerusalem, which is believed to be the path Jesus walked to Calvary. The object of the stations is to assist Christians to make a spiritual pilgrimage through the contemplation of Christ’s Passion. Traditionally, these images of reflection, and the prayer-cycle that accompanies their viewing, are a feature in most Western Christian churches and are commonly, a series of 14 images arranged in numbered order along a path which the faithful process from image to image, stopping at each station to intone selected prayers and incantations This may be done individually or, more commonly in a procession, and mostly during Lent and on Good Friday, and is construed as an act of reparation for the sufferings and insults that Jesus endured during his Passion.

My intention has been to utilise the concept of the Fourteen Stations to interpret my particular journey to Finisterre – as a series of works that each reflect a specific facet of the journey; a particular ‘stopping’ place along the way. Interpreted as a kind of personal litany, these towns and hamlets represent for me, a genius-loci of names and sensations. Pontemaciera, Negreira, Vilaserio, Olveiroa, Cee, Corcubion: all somehow have a resonance for me. Primarily created with bitumen and Galician wood-ash (the burning fragrance of which is so pervasive in the area and which remains, incense-like in the senses), whilst the use of gold-leaf and encaustic is intended to heighten the nature of an earthly, specific locale which lends a spiritual dimension to the nature of their fashioning.