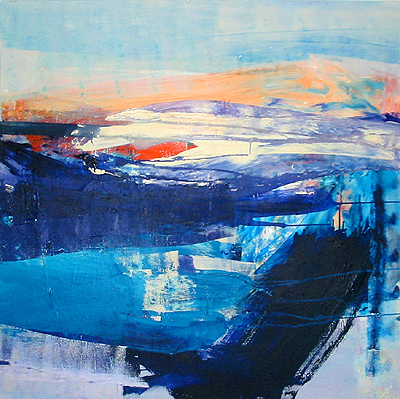 I have been obsessed with painting since childhood and painted steadily through my teens, progressing to Art School at St Martins and Byam Shaw. The schools of art which most inspired me early in my career are archetypally English. For example, from the Euston group, especially figures like Coldstream, I learned the importance of drawing and compositional techniques which are a strong feature of my work. I still practice these disciplines every week by attending a life-drawing work-shop in South London. For me drawing has the same importance as bar-work for a ballet-dancer. Without the graft which bar-exercise involves, the ballet cannot look effortless; in my own work I seek to create a similar sense of weightlessness, so that the material seems to fly across the canvas, but with the same purpose and direction of a good dancer.

After Art School, I became increasingly interested in the St Ives group, especially such figures as Roger Hilton, Patrick Heron and Ben Nicholson. From Hilton, I learned the importance of mark-making and line in painting; 1 was inspired by Heron’s expressive use of colour and from Nicholson, I learned the significance of structure in holding a painting together. I have since consistently attempted to negotiate between the claims of colour and structure without privileging either. Simultaneousl, I developed an enthusiasm for American Expressionism, particularly de Kooning and Pollock. What struck me in their work was the role played by dynamic, gestural mark-making and the fact that while their work bears an obvious relation to a material world outside their art, the paintings exist within their own logic and space as autonomous objects.

The preliminary stage in my process of composition is generally detailed field-work and observation of particular, real landscapes. In recent years, I have travelle to places as diverse as the Pyrenees, Greece and Cuba in search of the kind of wild and open sites which particularly inspire me. In mountains, I find the deep angles and drops which are an especially characteristic feature of my work. Generally I begin with long walks in the area to be painted, followed by rapid water-colour notations of the subject. I will often fill a couple of note-books with such sketches which I then work up later into a second, transitional stage of composition where I am staying. However, I now never paint the completed work in situ. I find the process of removing myself from the source of inspiration an important preliminary period of the work’s gestation and abstraction. On returning to my studio in Wandsworth, I expand on the field sketches, working up what is in effect a series of visual notes into the final object.

I often use collage or other mixed media. I favour acrylic, a quick-drying medium, to make the collage adhere to the surface of the canvas. I tend to work rapidly and very physically, with the canvases positioned on the floor, checking them periodically by raising them onto a wall or easel. Given the large scale on which I work (I regularly produce paintings which are six or even eight feet by four), 1 find that working on the floor is the best means to ensure a dynamicapplication of the paint. At this preliminary stage, the process of composition is more visceral and intuitive; when the canvas is raised, I work more intellectually, to check and shape the direction that the painting has been taking.

These are quite separate ‘moments’ which I compare to chess; on the floor I ‘attack’ the object from an emotional stance; when the painting is vertical, I enter a mode of ‘defence’, editing what has gone before.

In recent years, I have had solo shows with James Colman, The Air Gallery and Archeus Fine Art; and group shows at the Royal College of Art, the British Art Fair, Islington Art Fair, and Art First, amongst other venues.

Currently, my work is in a process of transition as I find myself experimenting with new compositional values. I am seeking to eliminate some of the structural features which have characterised my previous work. My aim is to create new sources of tension, together with a greater sense of fluidity, specifically in the spatial quality of my work. I am aiming for a more existential relation to landscape, defined more by my inner being, and am moving further away from literal correspondences to external landscapes. I am also experimenting with a different range of colours than in the past, while attempting to synthesise these into a more mobile and concentrated ensemble.