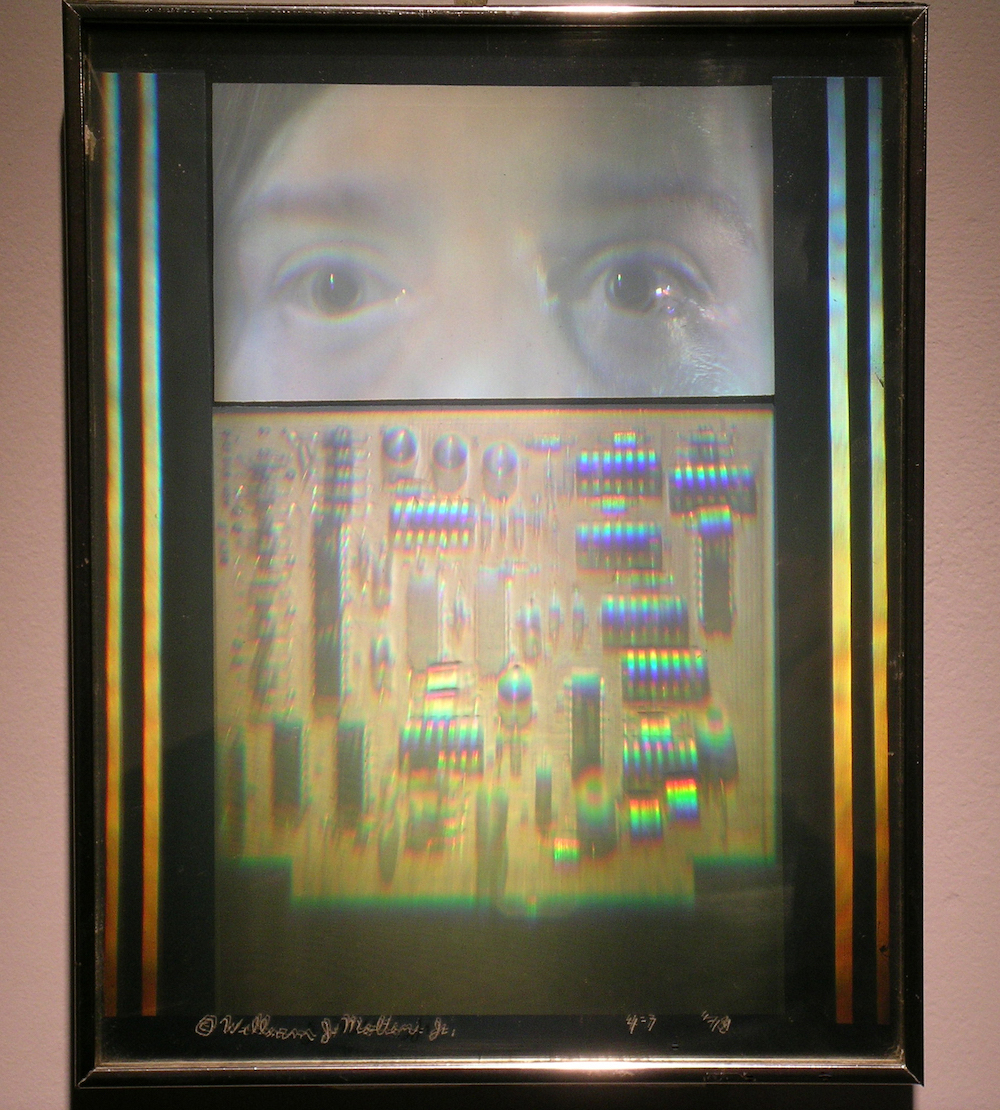 a selection of Achromatic and Pseudocolour works from
the Jonathan Ross Collection.

People who were around in the 1980s would tend to think of holograms (if they ever do any more) as those eerie green images (sometimes red or orange) occasionally found in gift shops, or the rainbow coloured ones on comic books or cereal boxes.

Those were certainly the dominant types used by the hologram industry of which I was a part in those days, but from the 1970s onwards there has been a different palette available to artists and designers who prefer a cooler look to their work, more akin to black and white photography or the hand-tinted images of the Victorian era.

There is a chapter in Graham Saxby’s textbook Practical Holography of which the heading is Achromatic and Pseudocolour Holograms, and the holograms I have selected for this small exhibition drawn from my collection, and from works on loan to me, provide some examples of the techniques available to the cool holographer.

Saxby defines Achromatic as ‘Colourless’ and explains that an achromatic image is an image that appears in shades of neutral grey instead of being in a single colour (‘monochromatic’).

Pseudocolour refers to a variety of techniques for making any image, or any part of any image, any colour you like – as opposed to true colour which suggests fidelity to natural colours.

When I started collecting holograms, Pulse Portrait of Susan Houde by Bill Molteni was an early acquisition. In contrast to the rainbow Multiplex holograms I had seen it had an eerie presence and I lent it out twice: once to an ‘in the round’ theatre performance “The Rontgen Light” – an evening dictated from Beyond the Grave, and once to The London Dungeons where it again stood in for a ghost!  I first saw Bill’s self-portrait ‘Stripes’ at the Light Dimensions exhibition in Bath in 1983 and was able to buy a copy some 30 years later from a colleague of his.

Jeffrey Robb is now better known for his fabulous lenticular nudes, but while a student at the RCA  in 1992 he made ‘Devon Coast’, a holographic stereogram generated from video filmed from a car window and by using an achromatic technique gave it the quality of a lunar landscape.

David Pizzanelli and I worked together in commercial holography for several years and he went on to take a PhD at the RCA in 1994 and produced a body of work using Edweard Muybridge’s photographic sequences which were perfectly suited to translation into achromatic holograms.  His Naous, which combines an achromatic skull with rainbow flowers, has always reminded me of an Andy Warhol.

Harriet Casdin-Silver made many unflinching studies of the human figure, using a variety of holographic techniques, but for her updated take on the Venus of Willendorf, a tiny prehistoric stone carving, her decision to collaborate with Hologram Industries of France to make a miniature achromatic stereogram could not have been more appropriate.

Patrick Boyd’s Lucy in a Tin Hat was originally made in 1989 and is recognised as a classic example of pulse laser portraiture. The copy on display was made in 2015 as a collaboration with August Muth, the contemporary master of dichromate gelatin holography, with whom Dora Tass also made her Perturbing Object hologram around the same date.

Patrick Boyd’s Virtual Dialogues is a pseudocolour stereogram on a nickel shim of the sort used to emboss holograms. Made in collaboration with the commercial company Applied Holographics, its subtle range of colours distinguish it from the more vivid palette usually associated with that medium.

Mike Medora’s aim was always to perfect the use of colour in holography, in which he has succeeded completely with his company Colour Holographic since 2000.  His 1989 work Nova is an earlier experiment using pseudocolour.

Isabel Azevedo is a Portuguese artist who studied at De Montfort University for several years in the early part of the 21st century, learning both holographic and lenticular techniques. The results were exhibited in an exhibition, entitled Changing Thoughts, at Gallery 286 in 2010, and I am pleased to be re-exhibiting two of the holograms in this show.

New York based holographers Ana Maria Nicholson and Rudie Berkhout collaborated on a series of works using her pulse laser and his graphic style of holography to produce a unique series of portraits, one of which is one display here. Ana Maria kindly donated the series to me in 2014 and I purchased her beautiful solo work Cocoon a few years previously.

During the 1980s, Larry Lieberman’s Miami based Holographic Images studio produced a range of stock images using pseudocolour techniques and acted as a facility for artists from various backgrounds to realise their concepts. Crystal Dreams by Zeno is an example of one such collaboration.

Matthew Schreiber, who worked with Larry Lieberman for some time and subsequently with the light artist James Turrell, has established himself as one of the most original artists working with holography and light in the USA. Stereogram techniques are his forte and The Archer,  made from found footage, demonstrates his individual approach.

Caroline Palmer began her holographic career making museum quality reproductions of ancient artefacts but went on to do an MA at the RCA where she became more interested in geometric patterns and Sacred Art. Hexagram dates from that period in the 1990s.

I have chosen mainly holograms by artists to exhibit here but Steve Provence, who worked mainly in the commercial sector, made some beautiful embossed achromates including his Egyptian Queen, which graced the cover of L.A.S.E.R News in 1989.

Finally, The Girl and the Hologram, an interactive holographic installation by Guillermo F.Heinze from 2006, is a three-dimensional form with holograms on each face.  Exhibited for the first time at 286, this piece is definitely cool in more senses than one!