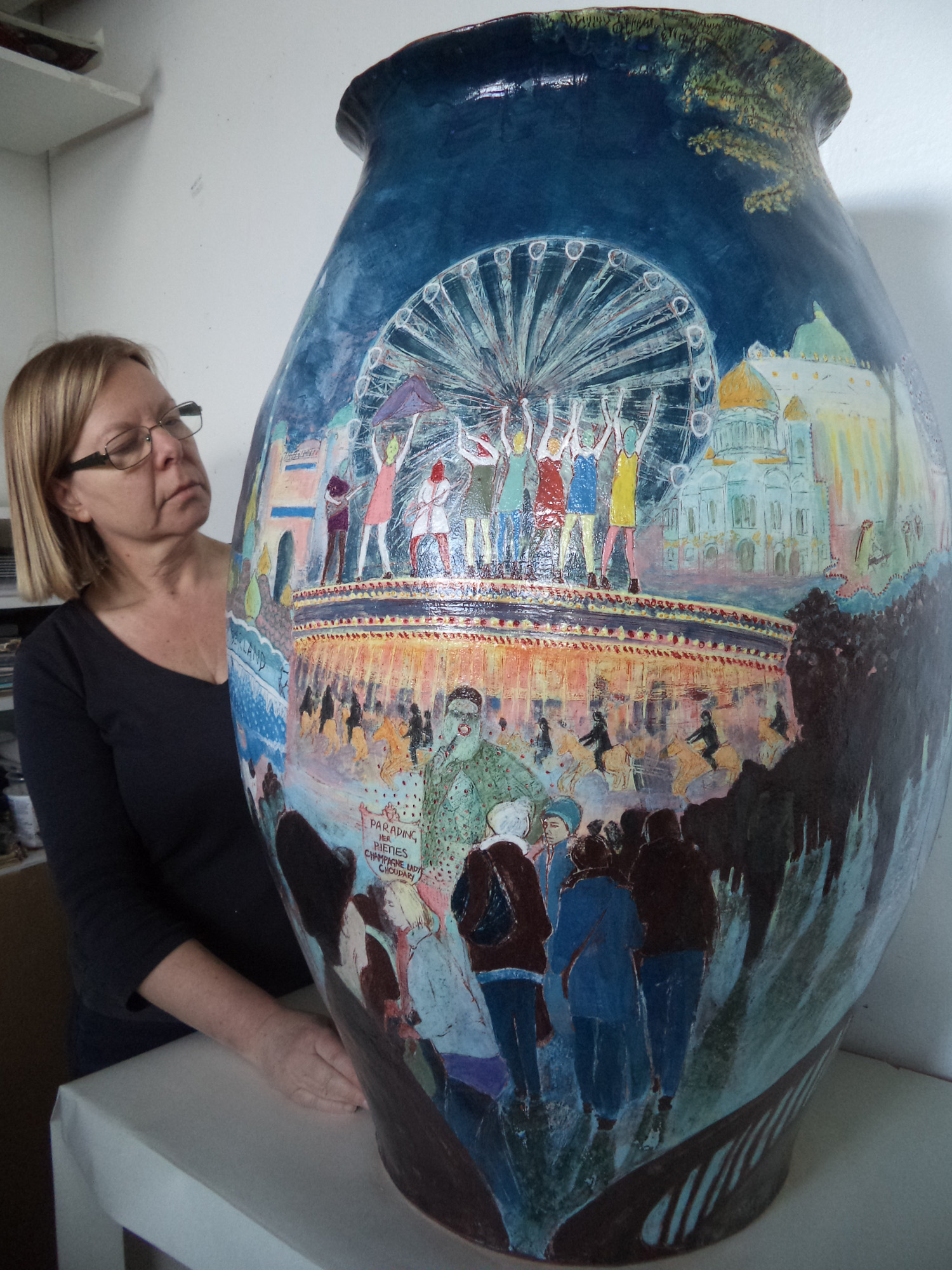 Images of Claudia Clare by Hossein Sahabi.  All other images by Sylvain Deleu.

Bring on the Baroque!
Painted Pots by Claudia Clare

Claudia Clare is known for her large-scale, slip-painted, earthenware jars that depict everyday scenes showing the impact of major events on the lives of ordinary people. Jackie Wullschläger from the Financial Times described her work as ‘history painting from a democratic view-point, in a domestic medium, which celebrates the hand-made material object as well as art’s subversion.’

I make pots to record the effect of social change and historic events on ordinary, everyday lives. Ceramics are our museum pieces and our archaeological evidence: mine are the contemporary version. Feminism brings a sense of intimacy to stories I work with and to the political issues they illuminate. As part of our domestic lives, pots are easily recognised and understood and, as such, can act both as memorials and as a call for action.

Why I chose to make pots

I trained as painter, originally, and then turned to ceramics for both formal and narrative reasons. Painting on the curved surface, where the edges are defined only by the base of the vessel and by its opening at the top, was far more enticing than the flat plane of the framed picture. Low fired earthenware allows a vast range in tone and saturation of colour, while the curved, turning form animates the imagery and dramatises perspective. The narrative possibilities of the ceramic forms – their social, political, historic and human associations – have proved to be fertile ground for exploration.

How I make them

My pots are handbuilt, using the coil method. Before the first firing, I paint them with coloured slips – slips are runny clay with coloured oxides added – and draw through the painted image to produce the drawn line, (scraffitto). After the first firing, I build up more colour, clear-glaze them, and fire them again. Each pot has at least three firings – the third is for the lustre and enamels. Drawing and painting play a significant part in the making process. Snapshot photography from my phone helps me to record some of the most intimate and fleeting moments, providing images that memory alone might discard.

Claudia Clare trained as a painter at Camberwell School of Art in the 1980s, followed by an apprenticeship with Winchcombe pottery in 1990. She became a regular contributor to Ceramic Review in 1997 and completed a Phd at University of Westminster in 2007. She is known for her large-scale, slip-painted, earthenware jars that depict everyday scenes showing the impact of major events on the lives of ordinary people. She was shortlisted for the British Ceramics Biennial Major Award in 2013, and was represented by Francis Kyle Gallery until the gallery closed in 2014. She co-wrote The Pot Book (Phaidon, 2011) with Edmund de Waal and her second book, Subversive Ceramics, (Bloomsbury 2016) came out earlier this year.

Baroque painting is associated with seventeenth century Europe, religious wars, reform and the Enlightenment. Visually, it is defined as a detailed, elaborate approach to imagery that aims to project a clear narrative and a direct appeal to the emotions. As a potter-painter, and one that prefers figurative, ‘busy’ narrative to the, often anodyne, abstraction associated with British studio pottery, I am delighted for my work to be allied to it. Our own time is also proving to be a battlefield of religious and political forces – not all of them sympathetic to Enlightenment values. If ever there was a time to reclaim the Baroque, that time has surely come.

Molly’s Odyssey, (2013), is a trio of pots based on Molly Bloom’s soliloquy at the end of James Joyce’s Ulysses. Molly muses, in delicious detail, on sex, love, romance, assorted lovers, new clothes, her childhood in Gibraltar, her first kiss, and roses: ‘I would fill the house with roses,’ she sighs. There is something knowing about Molly, without being cynical, and worldly but still with the innocence of the small-town girl. She is above all, womanly and proud of it. In these three pots, I celebrate her diva fantasies, (Diva), her thoughts on lovers and shopping, (Nothing Like a Kiss), and her memories of her first kiss, (Yes). It is worth remembering that Ulysses was first published, as a series, in 1918. Blasphemous and explicitly sexual, it would struggle to find a publisher now.

‘Bring on the Baroque’ is the eponymous trio of pots that respond, in allegorical form, to contemporary stories of migration, war and religion. ‘Nightwalker,’ (2014), depicts London at night, from the point of view of my friend Hossein, an Iranian refugee, as he started his new life here. The second, ‘Postcard from the Caliphate,’ (2016), is a satirical response to the expanding conflicts in the Middle East, and the third, ‘Expulsion,’ (2016), is an allegory showing a furious God – or possibly his Prophet – expressing their displeasure to their delinquent followers.