Travels with my Friend 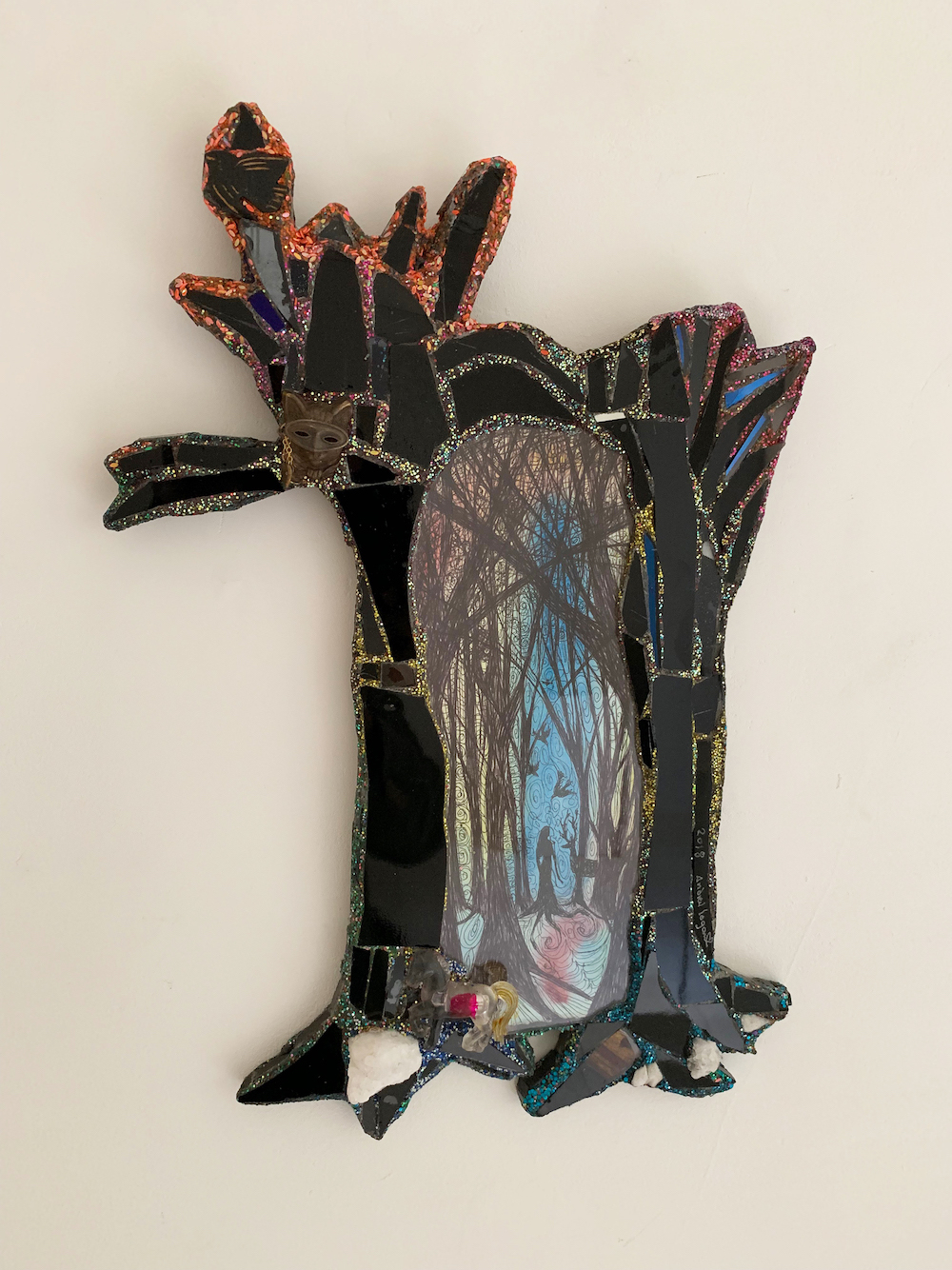 Travels with my Friend

An exhibition of collaborative works by Jennifer Binnie and Andrew Logan

I have been a huge fan of Jennifer Binnie’s work since I first saw it in the early 1980s.

Collaboration has been a great honour.
Life is magic.
Especially with Jen’s Vision 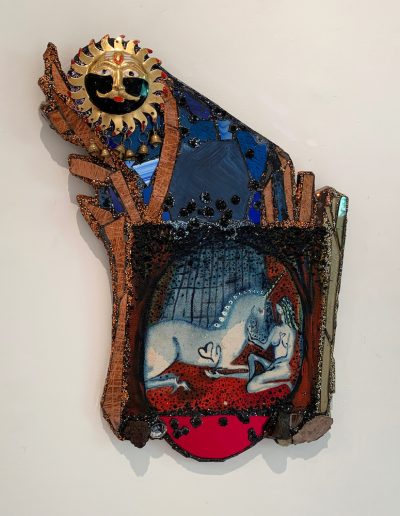 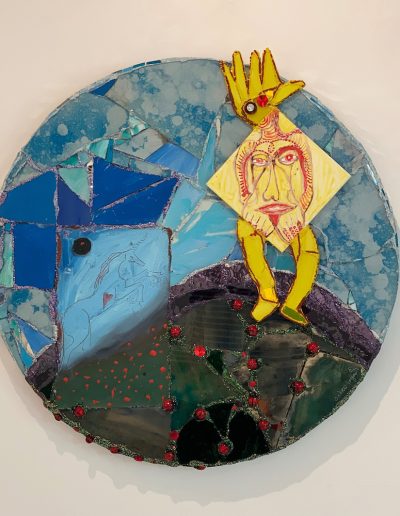 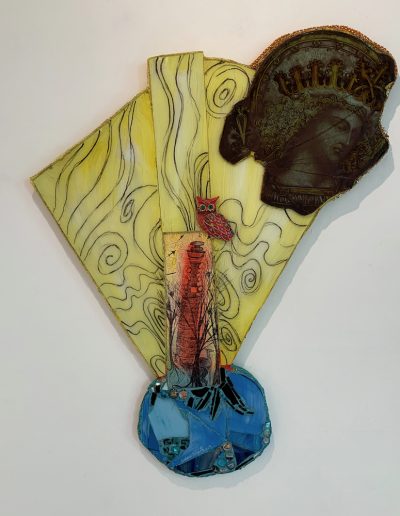 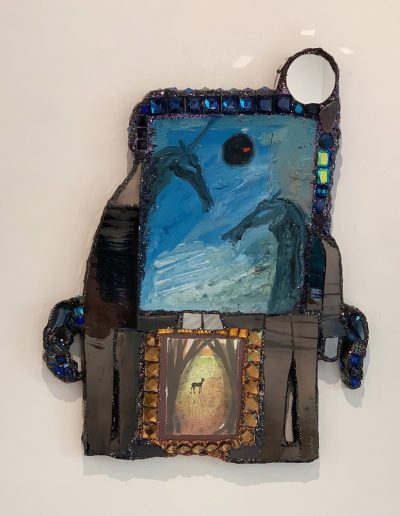 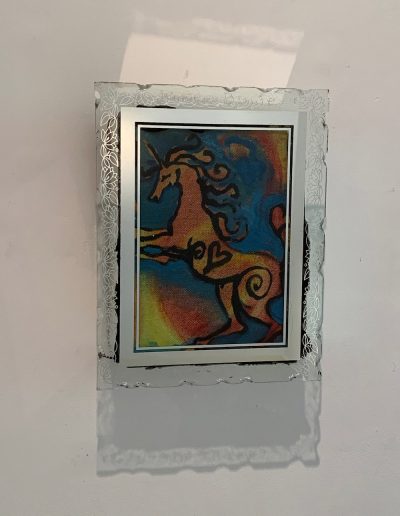 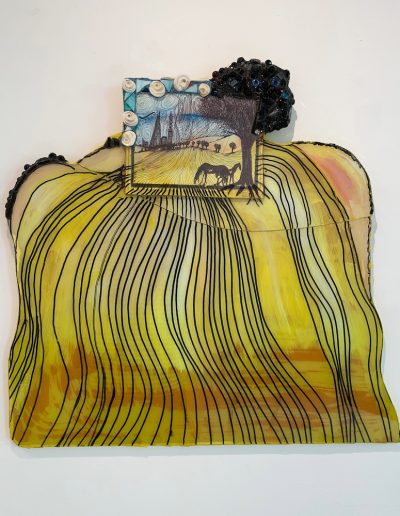 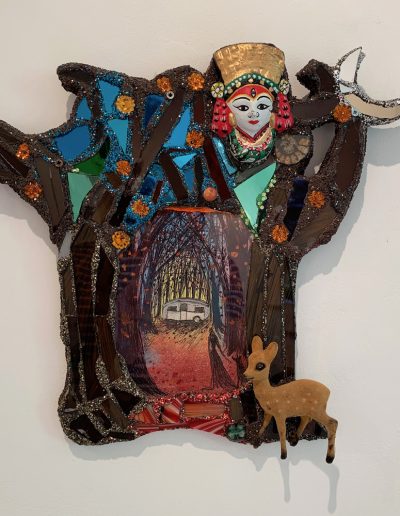 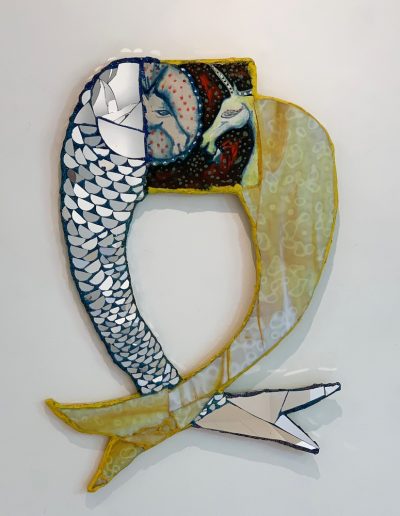 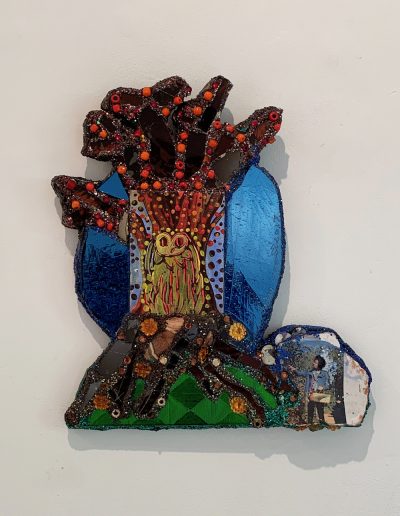 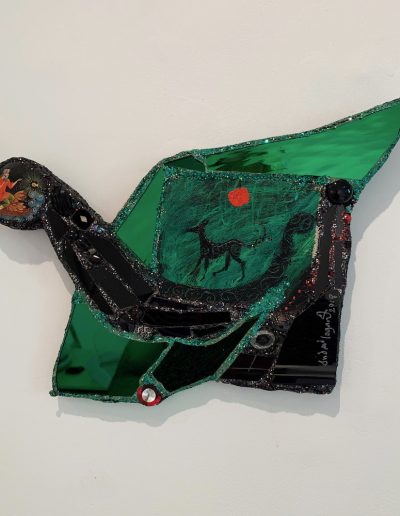 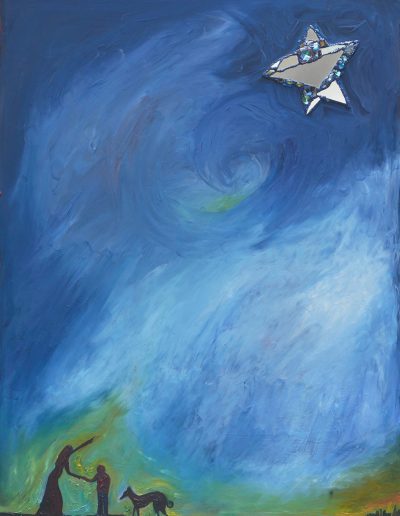 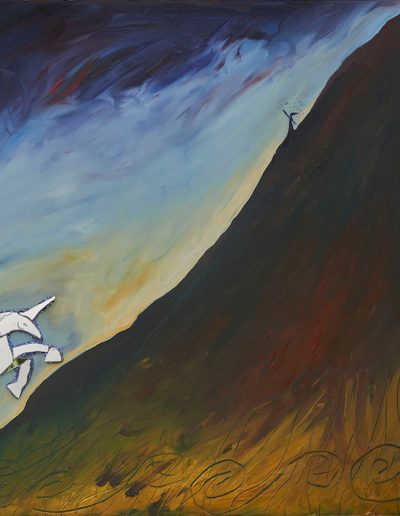 Just before the Winter Solstice of 1981 the sculptor Andrew Logan was installing his magnificent mirrored sculpture of Pegasus the winged horse on the cliffs at Beachy Head for a photoshoot when Christine and Jennifer Binnie arrived and, entering into the spirit of the occasion despite the freezing mid-winter weather, stripped naked and mounted the sculpture. Andrew had already met Christine but it was the first time he had encountered Jennifer, and it marked the beginning of a long friendship punctuated by similar performance art events, most notably at many of Andrew’s celebrated Alternative Miss World contests in which the Binnies and their Neo Naturist accomplices have been regular participants.

In 2002 Jonathan Ross invited Logan to be the Guest Curator of one of the Gallery 286 Christmas Shows in Earl’s Court, for which Andrew selected a group of artists including Jennifer Binnie. Jennifer submitted a set of plastic hubcaps, which she had found on the road in Sussex where she lives, painted in the form of wildflowers from the area, and these proved to be a great success. As a she has become a regular exhibitor at 286 with solo shows of her paintings in 2003, 2007 and 2016 as well as a group show of the Neo Naturists in 2012 with her sister Christine and Wilma Johnson, and numerous contributions to other group shows. Over the years Logan’s unique style of jewellery, sparkling with mirrored fragments, thrift shop finds and all that has been a constant presence in the display cases at 286 where cognoscenti look forward to seeing what new treasures have arrived.

Andrew Logan has been a presence on the London art scene since the 1970s where his various studios and homes have become famous as magical party destinations, attracting the most colourful and exhibitionistic characters from the worlds of art, performance and fashion, drawn not just by the exuberant creations of their host but by his celebratory and life-enhancing personality. Outside of the studio, the Alternative Miss World contests, which have been running on an occasional basis since 1972, attract contestants from all over the world and must certainly be the most inclusive pageant on the planet having been won by both men and women and on one occasion by one of Bruce Lacey’s Humanoid Robots. Logan has received numerous sculpture commissions over the years including several important public works on the Indian subcontinent. He has had a museum of his sculpture in Berriew, Mid Wales, since 1988 where he and his partner, the architect Michael Davis, have just completed the transformation of the Lion Hotel into a fabulous destination with each of its seven rooms decorated in a different Loganeseque theme, so now, if you want to buy into the Logan lifestyle, you can wear the jewellery, stay in the hotel and visit the museum all in the space of a weekend trip to Wales!

Jennifer Binnie’s art practice has incorporated not just painting and drawing but film-making, sculpture and performance. Some inspirational tutors at art college broadened her horizons and she soon found herself part of a highly creative environment in the squats, clubs and galleries of 1980s London. The gallerist James Birch exhibited both her and her Grayson Perry in his gallery off the New Kings Road at that time and the films that she and Grayson made have since been screened many times in venues including the ICA and Studio Voltaire. As one of the Neo Naturists, body painting has been central to her performance and the group’s activities from the ‘80s have received fresh attention in recent years from curators and a younger generation of artists. In the intervening Jennifer has developed a strong identity as a painter ( oil on canvas) and , for whom the Sussex landscape in which she grew up and continues to live, plays an important role, as do the myths and rituals of country life. One exhibition at 286 featured Jennifer’s interpretations of Grimm’s Fairy Tales and another had an entire wall of the gallery covered with A4 paintings – almost one a day for an entire year – creating a complex visual diary in which humour and angst play equal parts. London landmarks such as the Shard also figure in her painting, absorbed into a Binnie world inhabited by Unicorns, horses and maidens, and traditional women’s skills such as sewing have been incorporated into portraits of sacred monsters like Michael Jackson and Osama Bin Laden – Jennifer’s work is not to be taken on just one level, it rewards contemplation.

Andrew has long been an admirer and for this exhibition, Travels with My Friend, proposed that he take examples of Jennifer’s drawings and frame them in his inimitable style while, for her part, Jennifer has made new large scale paintings that incorporate some of Andrew’s jewels as elements of the composition. Their styles compliment each other remarkably well and the resulting works are clearly the result of two artists who know and respect each other’s aesthetic approach and the iconography that they have developed as individuals over the decades of their friendship.

Imagine one of Andrew Logan’s jewels scaled up from the size of your hand to the something large enough to hang above your bed, or one of Jennifer’s Sussex landscapes inhabited by a mirrored Unicorn, and you will get the picture. Installed in the London townhouse where Gallery 286 has existed for over twenty years, Travels with my Friend will be an unforgettable experience for viewers of their work and a delightful rediscovery for those who already know it.